Get the travel advice you need. Read more about possible travel restrictions before you go.

Recommended for you near Toronto Pearson International Airport YYZ Conveniently situated inside Pearson International Airport, this Mississauga hotel is directly connected to Terminal 3 and just a short ride on the Airport Link Train to Terminal 1. right in the airport, and easy access to the city 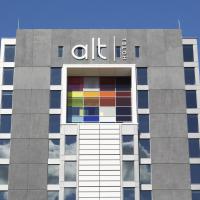 This Toronto area eco-friendly hotel is just 2 km from the Toronto Pearson Airport via a direct, free train. The bright and modern rooms feature a flat-screen cable TV. The bed was extremely comfortable and the staff amazingly helpfull Ideally located within 3 km of Pearson International Airport in Mississauga, Ontario, this hotel offers on-demand airport shuttle service as well as convenient access to area highways for easy travel... Great if you are laying over at Toronto airport. Free airport shuttle and good breakfast. Offering a free shuttle service to and from Lester B. Pearson International Airport, this Mississauga Hotel features a complimentary breakfast. An on-site restaurant and free Wi-Fi are also offered. Everything it was a pleasure to stay there 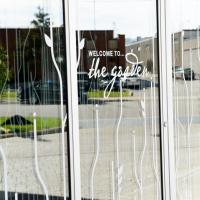 Located in Mississauga, 11 km from Mississauga Convention Centre, Element Toronto Airport provides accommodation with a restaurant, private parking, a fitness centre and a garden. The space, amenities and comfort provided was great. The breakfast was rich and the staff were very helpful and awesome. 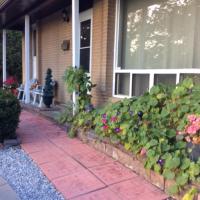 Located in Brampton, 11 km from Wild Water Kingdom, Private property with guest rooms provides accommodation with a seasonal outdoor swimming pool, free private parking and a garden. I was very late arriving, but the Staff was very accommodating and friendly. The room was large and clean. I was very happy with my stay 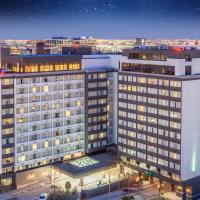 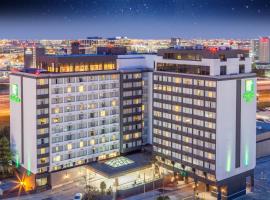 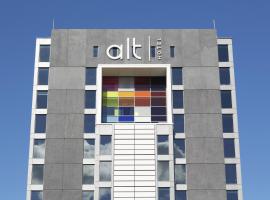 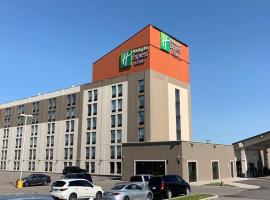 This hotel is located 20 minutes from Toronto city centre and provides a free airport shuttle to/from Toronto Pearson International Airport. It features an indoor pool, hot tub and free in-room Wi-Fi.... So self contained and everything one would need to feel at home:) 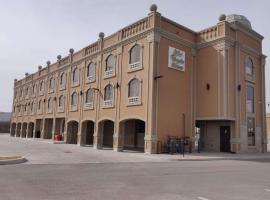 Set in Mississauga, 10 km from Mississauga Convention Centre, Chandni Victoria; BW Signature Collection offers accommodation with free WiFi and free private parking. The room was very clean. The check in was seamless, there's a lot of parking space and the...

Across from Woodbine Racetrack and offering free transfers to nearby Pearson International Airport. Free WiFi is available throughout. A complimentary breakfast is served daily. I like the free continental breakfast, the friendly staff, and how well they accommodated me.

Situated opposite the Toronto Congress Centre, this hotel boasts a Starbucks in the lobby and free WiFi throughout the property. Rooms were clean, housekeeping was so pleasant, pool was simple and perfect.

Located 8 km from the Toronto Pearson International Airport, this Mississauga hotel offers free airport transfer. Car rental services and a restaurant are on site and free Wi-Fi is provided. Friendly and attentive staff. The bed was extremely comfortable and clean. 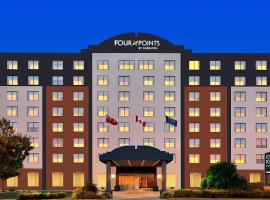 Just 10 km from Pearson International Airport, this hotel provides a free airport shuttle upon request. The bed was great! I made a stop over from Europe and you always hope that the less hours that are... Attractively situated in the Etobicoke district of Toronto, Doubletree by Hilton Toronto Airport, ON is situated 15 km from Aviva Centre, 16 km from York University and 20 km from Casa Loma. check in was quick staff friendly room very comfortable and clean 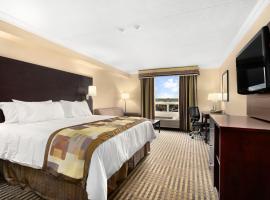 This hotel is less than 5 minutes from Toronto International Airport and offers free airport transportation. It also offers free Wi-Fi, a gym and rooms with a 37-inch LCD TV. Location price and cleanliness Located only a 7-minute drive from Toronto's Pearson International Airport, this hotel features free WiFi and a free 24-hour airport shuttle service. I haven’t slept like a baby in a long time. Honestly, the beds are amazing.

Toronto Pearson International Airport handles more passengers each year than the entire population of Canada. Though the airport is named after the city of Toronto, it is actually located in neighbouring Mississauga, which can be reached easily by car/taxi or public transport. Hop on the UP Express train to/from Union Station, which departs every 15 minutes, or catch the Airport Rocket bus to/from Kipling Station, which leaves every 10 minutes.

Nearby Hotels and Airport Facilities

Travellers with scheduled stopovers or unexpected delays can choose between several hotels near Pearson Airport in order to get some rest. Some hotels provide a shuttle service to/from the main terminal. There’s a wide range of facilities to keep you occupied before takeoff – check out the airport’s art collection that represents Toronto’s role as a gateway to North America. Other useful services include free WiFi, banking services, luggage storage and prayer rooms.

As Canada’s largest airport, Pearson offers a variety of international and domestic flights across two terminals: Terminal 1 and Terminal 3. The Terminal Link train offers 24/7 transportation between both terminals, Viscount Station, the Value Park Garage and the Value Park Lot.